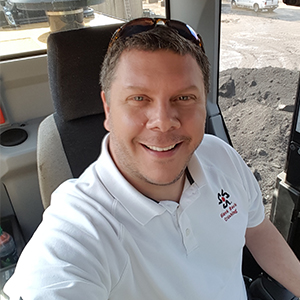 John started in the crushing industry in 1991 as a ground man on a portable crushing plant in Northern Minnesota.  Taking the advice of his father to “learn to break your back and then learn to break your mind” he found his passion was running big equipment and learning everything from the ground up.  This led to applying his business degree he earned at Mesabi Community College in everyday challenges he faced as he climbed the ladder, learning each job in his desire to reach the next level in the specialized crushing industry.

During the late 90’s he took a break from…breaking his back and entered the real estate arena.  There he grew his knowledge of real estate sales and appraisal.  Starting again at the bottom and reached sales that ranked him in the top 100 agents in the state.

The time came that the crushing itch was back and decided to return to his earlier passion, but this time it was to put all his experiences together and it was to be called “Black Rock Crushing”.  An informal meeting with Tom Lentsch and his close advisors, John painted the picture of his vision for a company that would succeed where others had not and would stand as a standard other’s would be measured by.

John has continued his climb up the ladder, becoming Vice President and a partner in BRC.  In his off time, he enjoys spending time with his family on new vacation destinations and working in his shop.